Carnival Cruise Lines, parent of brands including P&O Cruises and Cunard, has become the first in its sector to join a Mærsk Mc-Kinney Møller Center Initiative which seeks to accelerate a transition to net zero within the maritime sector
Lauren Foye
Head of Reports, Zero Carbon Academy
Follow
Like Liked by Oliver Gadsby and 1 other
0

Carnival Cruise Lines, the worlds largest cruise line, and of major cruise brands including Carnival, Princess Cruises, and Cunard announced last month that it had become the first in its sector to join an initiative for net zero shipping. The Mærsk Mc-Kinney Møller Center for Zero Carbon Shipping, launched in 2020 is a non-profit, independent research and development centre focused on accelerating the transition towards net-zero in the maritime sector. As Cruise Industry News reports[i], the initiative now has more than 40 partner companies signed up, including global stakeholders from a variety of shipping-related industries, including fuel suppliers, marine classification societies, shipping companies, engineering and manufacturing companies, energy companies and more. Further, a week following Carnival’s announcement, the cruise industries second largest player, Royal Caribbean Group, announced it too was joining as a ‘strategic partner’[ii].

At present, the maritime industry is a notable contributor to greenhouse gas (GHG) emissions, accounting for 3% of the global annual total. In fact, the Mærsk Mc-Kinney Møller Center cautions that their modelling shows that even if all current shipowner decarbonisation commitments are delivered as promised, only 22% of global maritime transportation will be net zero by 2050, and they add that this momentum would almost exclusively be driven by the container industry. Their research is comprehensive, taking into account the future growth of shipping, implementation of energy efficiency measures, cost and availability of renewable energy, consumer behaviour, finance cost and all relevant regulation that has been implemented. Worryingly it concludes that if the industry does not change course, the current path will lead to around 20% more GHG emissions by 2050.

The report drew attention to fuel cost being the main barrier to emissions reduction, with this a substantial monetary part of of ownership within the maritime industry- ranging from 20% in dry bulk to 35% in container. Fossil fuels remain the staple in the sector, as they have done for decades- they are easy to handle, energy dense, well understood and regulated, and available in most all ports globally. Whilst alternative fuels continue to be more costly to produce than fossil fuels (estimated by the study to be more expensive by a factor of 2-8 times) the gap is projected to narrow over time, but likely not substantially before 2050. Interestingly, we are seeing the cruise industry and shipping more generally facing both an increased threat of taxes and pressure to reduce carbon emissions, such as with the EU looking to add shipping to it's carbon market.

To accelerate the journey towards net zero in maritime by 2050, The Mærsk Mc-Kinney Møller Center notes the following ‘5 critical levers’:

Why reducing the environmental impact of the cruise industry matters

Many see the cruise segment as just a minor, or niche part of the wider tourism industry, where emissions discussion is dominated around the contributions of aviation, yet prior to the pandemic, there were 30 million cruise passengers per year. In total, it is estimated that the tourism sector accounts for between 8-10% of global GHG emissions[iii]. However, all aviation (passenger and freight) is responsible for 1.5% of global GHG emissions[iv] and the maritime industry accounts for 3%. Further, it has been noted that sizing the GHG emissions of the cruise industry is made difficult by the fact that there is no standardised reporting by large players, with different emissions measures used.

The cruise industry has also been subject to repeated criticism from environmental groups- we have seen reports and subsequent punishment (often fines) relating to issues such as the dumping of food, plastic, sewage, or wastewater into the ocean, the falsifying of records of environmental compliance, and accusations of ‘greenwashing’.[v] Further, while large players such as Carnival and Royal Caribbean have made commitments to decarbonisation, industry body CLIA (Cruise Lines International Association) recently attempted to water-down environmental regulations. The body, who’s membership accounts for 95% of global cruise trips, attempted to lobby the International Maritime Organization, who rejected their effort “which would have improved cruise ships’ carbon pollution scores. Environmental groups say it also would have led to more air pollution by allowing cruise liners to continue with business as usual”[vi].

Yet, there has been some movement towards improvement within the cruise segment, particularly regarding fuel. Some newer ships, such as AIDANova operate on low-emission liquefied natural gas (LNG), environmentally there are significant benefits, LNG fuel helps reduce a cruise ship’s carbon emissions by approximately 30%, making it an attractive near-term solution for new builds. However, LNG ships are constrained to sailing itineraries which provide access to ports which have LNG refuelling capabilities, making this somewhat limited at present. There is also the potential for older ships to be retro-fitted, however this is costly. A further approach is to use charging points dockside to offer shore-to-ship charging which can make use of renewable energy, rather than burning fuel onboard.

[1] Climate change and flying: what share of global CO2 emissions come from aviation? - Our World in Data 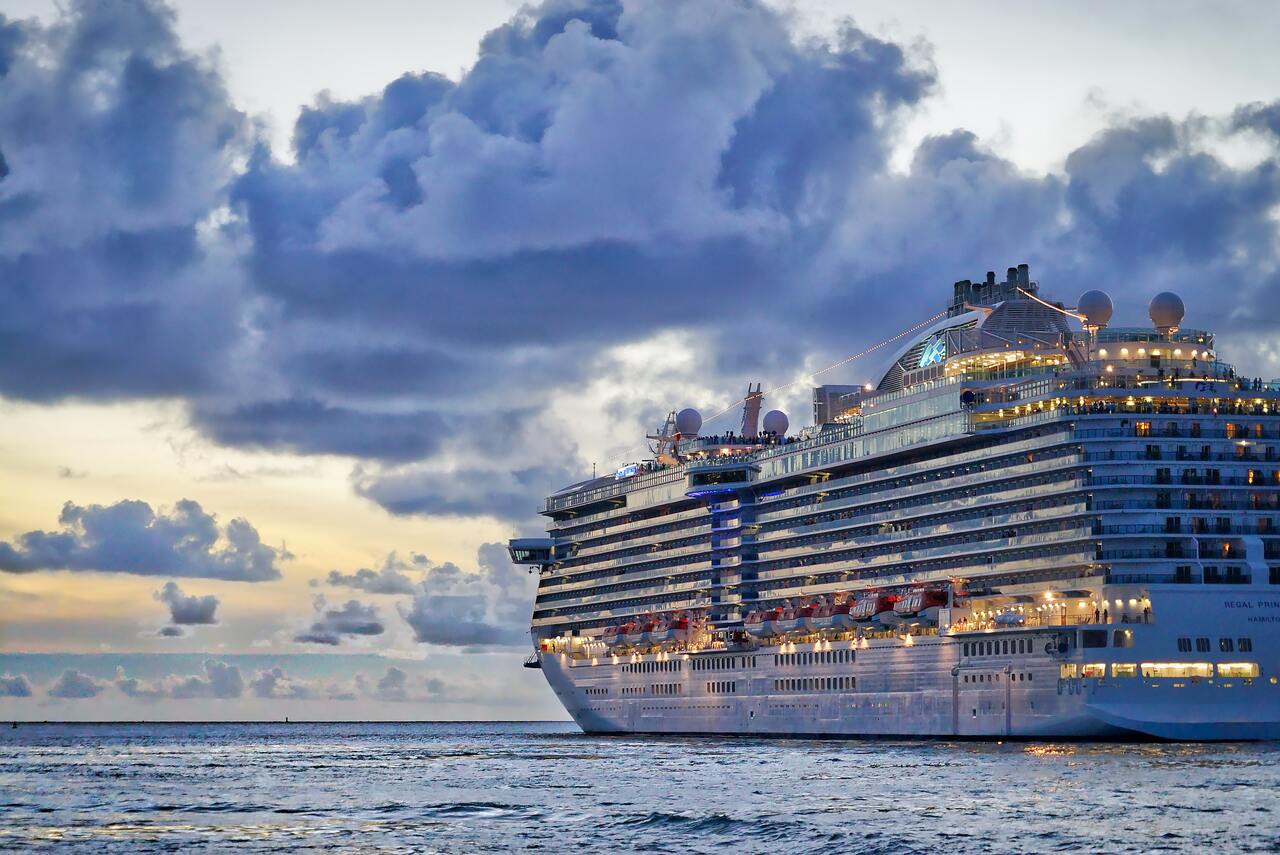 In order to accelerate the transition to net zero within the maritime sector, Carnival Cruise Lines, parent company of P&O Cruises and Cunard, has become the first company in its sector to join the Mærsk Mc-Kinney Møller Center Initiative.