Retailer Ocado is set to open its third local delivery site in London. The ‘Zoom by Ocado’ one-hour delivery service uses green transport, such as electric bikes, to deliver goods locally
Lauren Foye
Head of Reports, Zero Carbon Academy
Follow
Like Be the first to like this
0

A new ‘Zoom by Ocado’ site in Leyton, East London, is set to open, becoming the third location offered by ‘Ocado Retail’, itself a joint venture between Marks & Spencer Group and Ocado. Zoom offers the local delivery of more than 10,000 products, including fresh produce and groceries, which can be delivered within 60 minutes, or within a one-hour slot of the customer’s choosing.

It is hoped that Zoom’s latest site will create 130 people across a range of roles, including team leaders, drivers and warehouse staff[i], and follows the launch of a similar site in Canning Town, Newham, earlier this year. The first Zoom by Ocado opened in Acton, west London, back in 2019. A further site is planned to open in Leeds over the coming months, as the company looks to expand further across the UK.

Ocado’s head of Zoom, George Dean, was quoted by Edie.net as saying: “We’re delighted to be opening our third site, bringing Zoom by Ocado to more customers in North and East London from our new site in Leyton. We’re committed to being the best neighbour possible, contributing to the community by way of supporting local suppliers and through charitable partnerships in the area.”[ii] He added: “We believe that rapid delivery shouldn’t mean compromising on product range, value or quality – our existing customers tell us they love the wide range available on Zoom by Ocado, which includes M&S lines, great-value Ocado own-label range and hyper-local suppliers such as East London Liquor. We can’t wait to bring all this and more to Leyton now, and Leeds in the coming months.”[iii]

One of Zoom's key features lies in its use of green modes of transport, bringing back more traditional means of grocery delivery via bicycles. Ocado previously trialled electric assisted and pedal-powered vehicles at its flagship Zoom site in Acton, West London, in early 2021. At the time, Ocado stated in a press release that the vehicles involved would “include electric refrigerated vans, refrigerated EAVs (-electric assisted vehicles) and pedal-powered cargo bikes which can travel up to 40 miles thanks to innovative refrigeration capabilities. This means that they can deliver more orders per trip taken. More drop-offs during the same journey results in a more efficient delivery service and fewer vehicles on our roads. Every delivery made in these new vehicles is zero-emitting and replaces the need for the use of a petrol van, car or moped. We estimate this results in a saving of 7.7kg – 9.6kg of emissions per vehicle per day.”[iv]

The trial was such a success that Ocado decided to make the use of such transportation permanent, and since launching Zoom, more than 880,000 orders have been completed across the two initial London sites. The latest site in Leyton will utilise a fleet of 100% last-mile green deliveries vehicles, including electric cars, mopeds and e-cargo bikes. Shopping will also be delivered in recyclable bags[v].

Ocado committed to Net Zero by 2040, as concerns raised over pollution from local delivery services

Ocado is part of a consortium of retailers committed to Net Zero by 2040. Convened through the British Retail Consortium (BRC), 63 businesses, including Aldi, Asos, Kingfisher and Primark, committed to a Climate Action Roadmap in 2020. The roadmap seeks to deliver net zero by 2040, as well as decarbonise stores by 2030, deliveries by 2035, and products by 2040[vi].

Ocado’s decision to utilise green vehicles is in itself a positive step in the last-mile delivery space, where there is much concern around associated pollution and waste.  As we previously discussed, the pandemic saw a surge in last mile deliveries, a behaviour change that appears set to persist. In 2020 at the height of the pandemic, Amazon reported that its carbon footprint had grown 15% over the previous year: “activities tied to its businesses emitted 51.17 million metric tons of carbon dioxide, the equivalent of 13 coal-burning power plants running for a year.”[vii]

Food delivery services, in particular, have disrupted the landscape for emissions in the hospitality sector. Before the pandemic, the WEF projected that by 2030 delivery vehicles in the world’s 100 most delivery vehicle-intensive cities will rise by 36%.[viii] Further, with the monumental growth in online food delivery during the pandemic, Statista now estimates a 50% increase in users of such apps[ix]. Concerningly, research undertaken by Uswitch and reported by EuroNews suggested that a spend of €50 weekly could result in a 450% rise in that household’s carbon footprint[x]. On waste, research from Ecowatch has suggested that 44% of oceanic plastic waste is related to takeaway food.[xi]

Here at Zero Carbon Academy, we previously noted that a trend to watch for would be the rise of ‘Ultra-fast delivery services’[xii]. Where previously the ‘sharing economy’ food delivery start-ups, such as Deliveroo or Uber Eats (whom themselves have a target to reach zero emissions by 2040), had offered partnerships with supermarkets to deliver a small range of basic goods almost instantly, we would instead see Supermarkets expand their own, far broader offerings, promising deliveries within an hour.

However, it remains to be seen how businesses making these ultra-fast deliveries will address concerns over congestion, emissions, and efficiency, given the struggles we have already seen from more standard last-mile delivery practices. Ocado’s use of electric vehicles is certainly a step in the right direction; however, whether others will follow suit remains to be seen. Interestingly, a number of alternative business models are emerging, a case in point being Waltham Forest Councils ZED delivery service which supplies goods to local businesses via cargo bikes and trikes. A further example is Foodstuff, who only deliver goods from independent retailers.

[viii] WEF- The Future of the Last-Mile Ecosystem

[ix] The Rise of Food Delivery Apps Has Changed the Landscape of Hospitality Emissions, but Where Does Responsibility to Handle it Lie? With the Apps or the Venues? | Zero Carbon Academy

[xi] Ecowatch- 44% of Ocean Plastics Are Linked to Takeout Food

It may also be worth noting Uber Eats have a 2040 target to be zero emission https://www.uber.com/gb/en/about/sustainability/)

There are a number of interesting business models emerging. For example, Waltham Forest Council’s own service https://zedwalthamforest.co.uk and Foodstuff for independent retailers https://wearefoodstuff.co.uk. 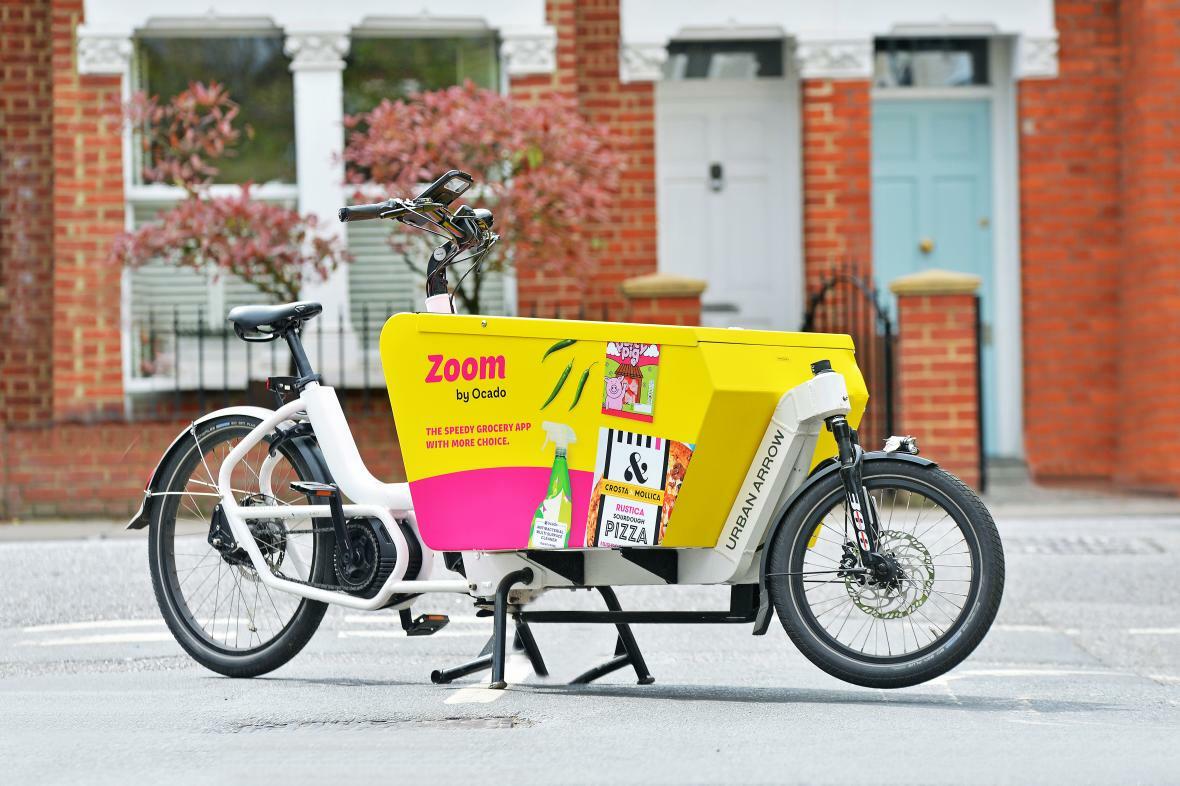